Five divers from Vancouver Island have been exploring parts of the East Coast that very few Canadians will ever see.

Divers Maxwel Hohn and Russell Clark from the Comox Valley, along with three others from the island, are part of an international team that reached the underwater crash site of a Second World War bomber in Gander Lake, Newfoundland.

The B-24 Liberator bomber crashed in 1943, killing all four crewmembers on board.

"When you come across this wreckage, it’s a mix of feelings. There’s sadness with excitement because the crew did lose their lives," said Hohn.

The initial dive on Monday was to scout out the wreckage and confirm it was there.

A Newfoundland researcher had been looking for the aircraft for roughly a decade. Its position was finally narrowed down in June using side-scan sonar.

"The crash happened within a small distance of the Gander Air Force Base," said Comox Valley diver Russell Clark.

"At the time in 1943, navy divers were dispatched onto the aircraft to try to recover the bodies of the airmen," he said.

Only one body was recovered at the time. The remains of the other three airmen are still in the wreckage.

"Nothing was disturbed or touched or taken during the exploration, it was purely an image gathering dive," said Russell. 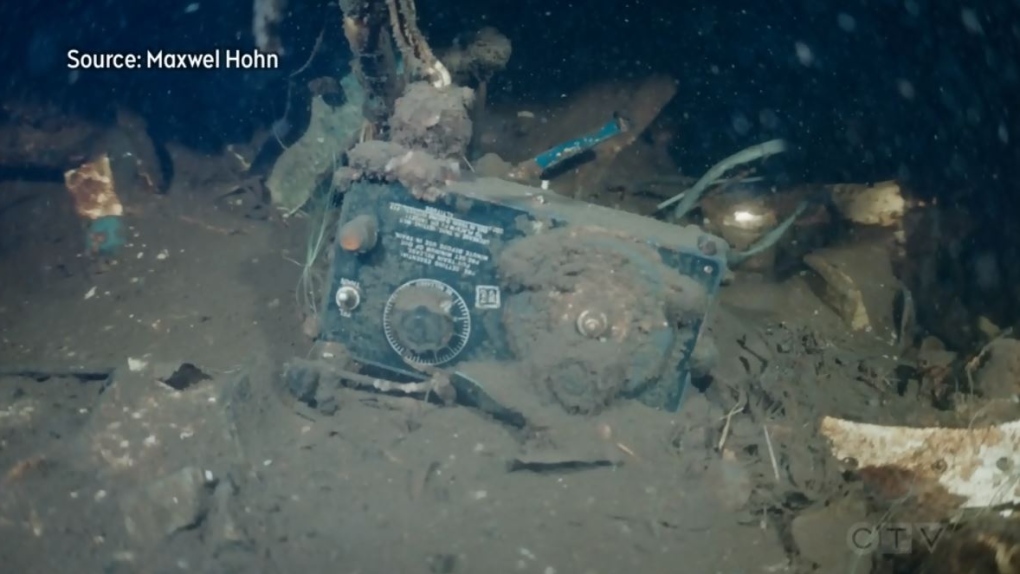 An image of the wreckage is shown. (Maxwel Hohn)

Hohn added that the experience was eerie but rewarding.

"Getting down there you’re on a gravesite and it’s a bit haunting, but it’s also really exciting to find a piece of history and prove that this bomber is in this location," he said.

All details, maps and documentation on the bomber will be handed over to the Royal Canadian Air Force, which still owns the aircraft.

Monday's dives were conducted one day after the 79th anniversary of the crash.

The research team hopes the find will help bring Canadians closer to their history.

"It’s important to share this cultural history story with other Canadians that probably don’t know how much Newfoundland was embroiled in the Second World War," said Jill Heinerth, explorer in residence with the Royal Canadian Geographical Society.

"I knew nothing about the fact that German U-Boats came in and were sinking the wrecks at Bell Island and destroying the loading wharf from the Bell Island mine," Heinerth added.

"And these Liberator bombers would have been protecting some of these convoys," she said.

The team was near Bell Island again Wednesday searching for more artifacts.