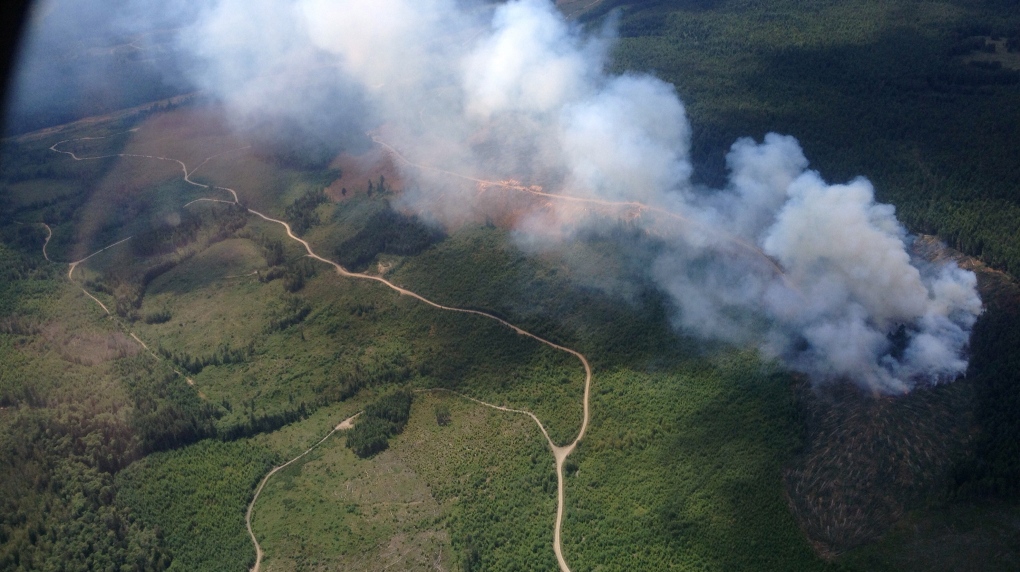 A 6.5-hectare wildfire near Boomerang Lake near Nanaimo is pictured: June 22, 2015 (BC Wildfire Management Branch)

VICTORIA -- As temperatures rise and weather begins to improve across British Columbia, the BC Wildfire Service is reminding residents to be cautious this fire season.

According to the BC Wildfire Service, 83 per cent of recent wildfires were confirmed to have been caused by humans.

Since April 1, B.C. has contended with 111 wildfires, meaning that approximately 92 were sparked by people.

The wildfire service is now reminding residents that most open burning activities throughout the province are prohibited at this time and that people who are found breaking the law can face hefty fines.

The wildfire service recommends several steps to help reduce the risk of starting wildfires, including ensuring that campfires are started far from trees and flammable material that could lead to its spread.

A full list of BC FireSmart prevention tips can be found online here.

On Vancouver Island, local fire departments are reminding residents that beach fires are not permitted at this time.

According to the District of Central Saanich, 12 fires were extinguished on Island View Beach this past weekend. Beach fires are never permitted on most public beaches, especially as fire season approaches.

“Beach fires pose a fire risk to plants and trees, and could spark a wildfire, which is not something we can risk—especially given the current circumstances,” said Central Saanich in a release Tuesday.

“Smoke from a beach fire not only impacts air quality for nearby residents, it is toxic. When burned, driftwood releases carcinogenic dioxins into the air due to combustion of the sea salt-saturated wood,” said the municipality.

This year, the wildfire service estimates that B.C. will be experiencing “normal” to “dry” spring fire conditions.

While April was drier than normal across the province, especially in the Prince George area – which experienced its driest April ever recorded – the wildfire service says that rainfall and remaining snowpacks have helped to keep the total number of wildfires low.

To help reduce the risk of wildfires, the BC Wildfire Service recommends checking up on fire prevention tips, and ensuring that all flammable materials are extinguished after use, like cigarettes or other smoking products.