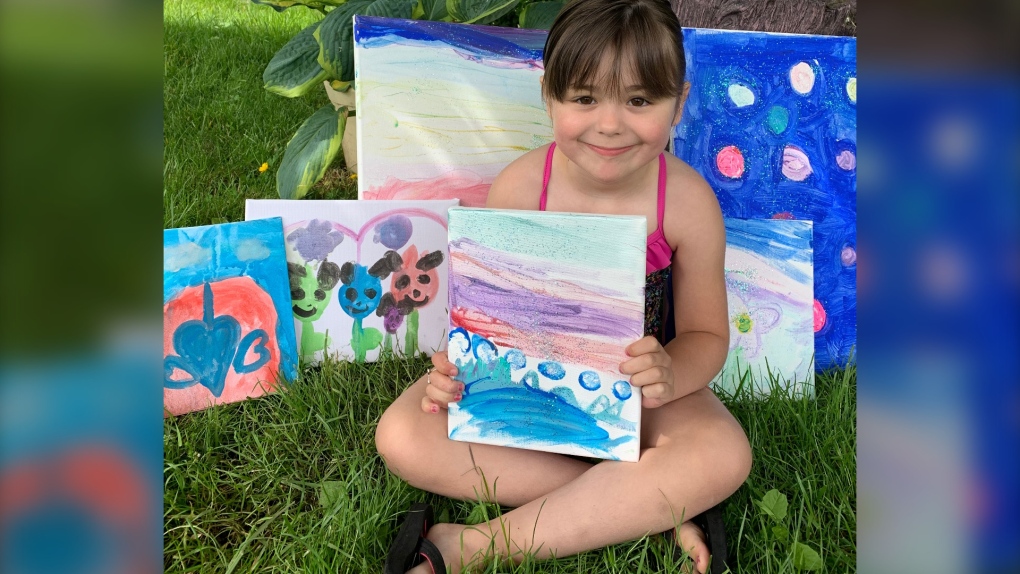 Charley's plan was to set up a stand outside on the lawn and sell her artwork to raise money for the local food bank. (Zoë Urquhart)

VANCOUVER -- Charley Urquhart spent her sixth birthday sitting outside in the rain, flagging down neighbours and strangers to ask them to donate money to help those in need.

Charley's mother Zoë Urquhart says her daughter went up stairs to play in the family's art-making space, something she does regularly.

"She came back down about 45 minutes later with a box and a sign that said '$1,'" Zoë recalls. "She asked me for a jar and how to spell 'drawings.'"

Charley's plan was to set up a stand outside on the lawn and sell her artwork to raise money for the local food bank.

Zoë says she was skeptical at first, but allowed her daughter to go set up.

"I kind of expected her to be out there for, you know, a half-hour, an hour," Zoë said.

The next morning, her sixth birthday, Charley wanted to do it again. This time, her mother set up a small tent to shield her from the rain. She spent three hours at the side of the road offering her artwork to both friends who stopped by to wish her a physically distant happy birthday and passing cars she flagged down.

"Monday, she wanted to do it again," Zoë said. "This time she wanted me to put it out on Facebook and let my friends know that she was going to be out on the lawn at 2 o'clock."

Charley also asked her father - a police officer in Vancouver - to put the word out to his friends and colleagues.

Donations started coming in via e-transfer, and by Wednesday, the Charley's fundraiser had topped $1,000.

"That was the number she had in her head, and to have reached that on Wednesday was just a real testament to what children can do when we don't limit them," Zoë said. "The food bank said that money will feed 130 people for a month. I mean, that's a lot of people in our community."

Charley put her efforts another way:

The pair went and dropped off the donations at the Comox Valley Food Bank on Wednesday, but more money is still coming in. Zoë says the final total will be more than $1,100.

Charley's no longer setting up her art stand every day, but she still has plenty of work to do.

"She made a promise to everybody who donated something online that she would send them something in the mail," Zoë said.