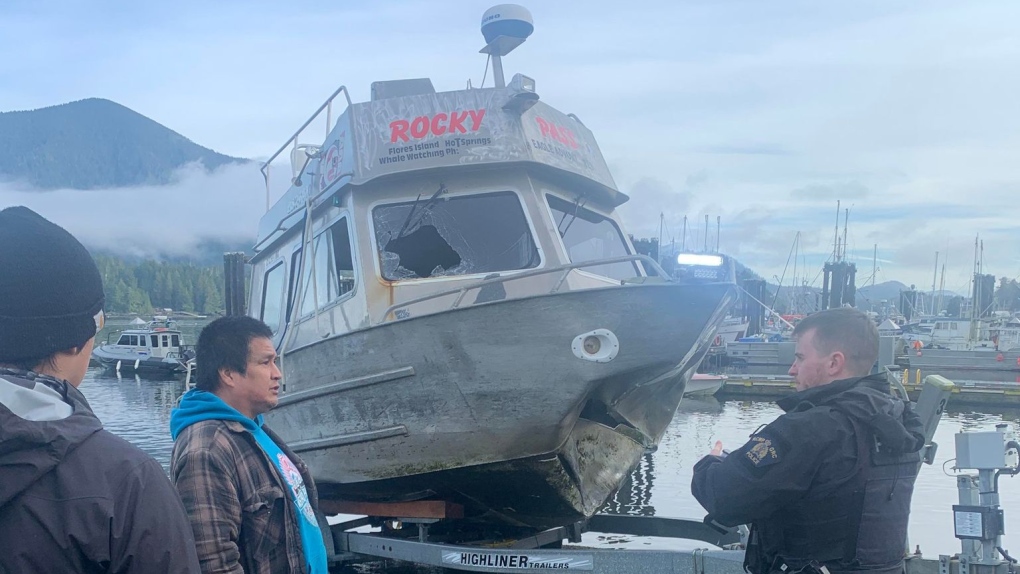 The vessel ran aground near Catface Peak in a remote region northwest of Tofino: (Merceline Jack)

Four people were taken to hospital, including two in serious condition, after a water taxi crashed near Tofino, B.C., on Tuesday.

The 7.5-metre vessel ran aground with five people aboard near Catface Mountain in a remote region northwest of the community.

The coast guard vessel Cape Ann responded to the scene shortly after 9:30 a.m. and transported all six people to the First Street dock in Tofino.

Paramedics began treating the injured while the coast guard returned to the scene of the crash to tow the vessel back to Tofino as it was taking on water, according to Maritime Forces Pacific spokesperson Lt. Pamela Hogan.

A spokesperson for B.C. Emergency Health Services says two of the injured were in serious condition Tuesday afternoon, while the two others were in stable condition.

The Transportation Safety Board has been contacted and will conduct an investigation into the incident, Hogan said.

RCMP add that they have seized the boat for an inspection.

Weather is believed to be a factor in the crash, since it was foggy at the time, RCMP say.

Toronto Maple Leafs winger Mitch Marner was the victim of an armed carjacking outside a movie theatre in Etobicoke on Monday night, the club confirmed on Tuesday.

Mariupol appeared on the verge of falling to the Russians on Tuesday as Ukraine moved to abandon the steel plant where hundreds of its fighters had held out for months under relentless bombardment in the last bastion of resistance in the devastated city.

The Liberal government is moving to ban Russians sanctioned over Moscow's invasion of Ukraine from entering Canada. The government tabled proposed amendments to federal immigration law in the Senate today to ensure foreign nationals subject to sanctions under the Special Economic Measures Act are inadmissible to Canada.