VICTORIA -- Three men have been arrested and a massive amount of illegal drugs, including highly concentrated fentanyl, were seized alongside 20 firearms following a joint investigation by Victoria Police and the Combined Forces Special Enforcement Unit of BC (CFSEU-BC).

The drugs seized have an estimated value of $30 million, according to VicPD, and the more than 12 kilograms of fentanyl recovered is enough to cause approximately 3,975,000 lethal doses.

The drugs and firearms were discovered on Vancouver Island and the Lower Mainland after an investigation into organized crime was launched in Victoria in early June.

In August, Victoria police contacted the CFSEU-BC’s Anti-Trafficking Task Force and the two departments launched a joint investigation in the matter under the project name, “Project Juliet.”

Police say that two people were arrested during the searches – one at the Fairfield Road building and one at the vehicle. More than two kilograms of high-concentration fentanyl, two kilograms of methamphetamine, more than one kilogram of cocaine and over six kilograms of drug cutting agents were found between the four searches. A replica assault rifle and roughly $50,000 in cash was also seized in Victoria.

“When it comes to fentanyl, it’s by far the largest drug bust that we’ve had in the history of our organization,” Victoria Police Chief Del Manak told reporters Wednesday.

No injuries were sustained in the arrests, say police. 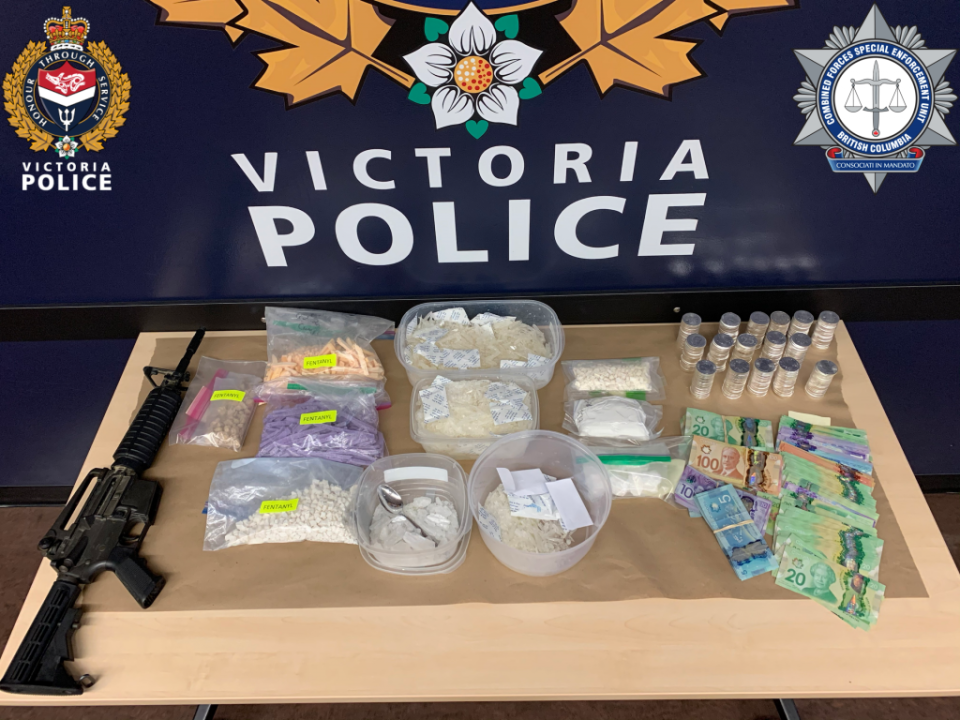 Search warrants were executed at an apartment building suite in the 1100-block of Seymour Street in Vancouver, at a suite in the 4500-block of Halifax Way in Burnaby and at a home in the 1500-block of 80th Avenue in Surrey. Police say one man was arrested at the suite in Burnaby. No injuries occurred during the arrest.

The seized firearms include three shotguns, two “carbine-style assault rifles” and seven pistols, as well as a pistol suppressor.

On Dec. 11, officers in the Lower Mainland also seized two more sets of body armour and eight more firearms with ammunition at a storage unit in the 1600-block of Lougheed Highway in Coquitlam, when executing a search warrant.

In total, 20 firearms were seized, including rifles that had been “modified to be fully automatic,” say police. Many of the guns also had their serial numbers removed.

Tests by Health Canada on the seized fentanyl determined that the substance contained between 88 to 90 per cent fentanyl, a staggeringly high amount. Police say that prepared portions of the drug that were mixed with cutting agents contained roughly 13 per cent fentanyl concentration, “which is extremely high and would likely contribute to an increase in overdoses.”

Police say that typical street level concentrations of fentanyl are in the range of three to five per cent concentration.

Officers are currently recommending drug trafficking and firearms charges against three men, one from Calgary, one from Surrey and one from Vancouver. The investigation remains ongoing.

“I want to thank Chief (Del) Manak and everyone with the Victoria Police Department for their significant contributions on this complex multi-jurisdictional investigation,” said Michael LeSage, RCMP Assistant Commissione and Chief Officer of CFSEU-BC, in a statement Wednesday.

“Their efforts have not only assuredly saved lives in Victoria, the Capital Region, and Vancouver Island, but across the province by advancing this investigation to the point where we were able to seize large amounts of dangerous drugs and illegal firearms,” he said.