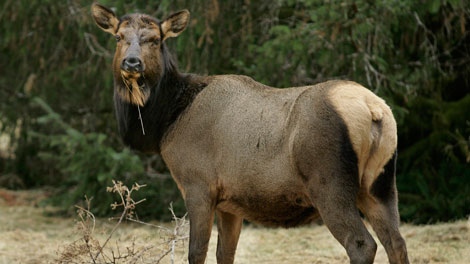 VICTORIA -- Three more Roosevelt Elk, a threatened species in British Columbia, have been illegally killed on Vancouver Island, according to the BC Conservation Officers Service (BCCOS).

The recent poaching occurred in the Lake Cowichan area, where at least 15 similar illegal killings have taken place since the beginning of the year. These three carcasses were found by a licenced hunter between Lake Cowichan and Port Renfrew.

According to BCCOS Sgt. Scott Norris, all three of the elk were females, and likely pregnant due to the time of year.

The BCCOS says that of the three elk carcasses found, "one elk was left to waste, while the others had minimal amounts of meat harvested."

"This is a senseless crime against our wildlife resources," said the conservation service in a social media post Friday. "Please report any info to the #RAPP line (1-877-952-7277)."

In April, the BCCOS said there had been a surge in Roosevelt Elk poaching in the Cowichan Valley area. Since then, other areas of the island have seen illegal elk killings, including in Nanaimo where a pair of elk were killed in October.

Since Roosevelt Elk are a threatened species, there is no general open season for hunting the animal on Vancouver Island at any time of the year. However, Norris notes that there are a limited number of elk that can be legally hunted each year.

Of the approximately 3,200 Roosevelt Elk in B.C., roughly 3,000 live on Vancouver Island alone.