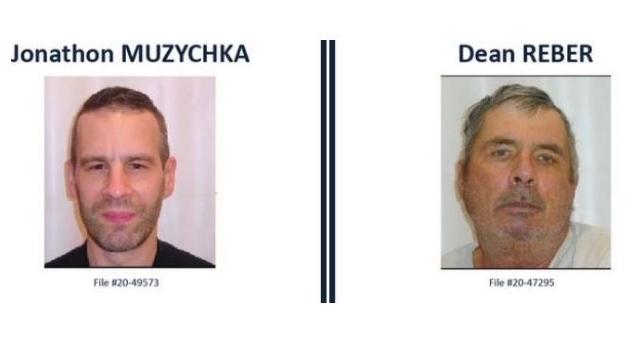 Police say wanted men Dean Reber and Jonathon Muzychka were arrested in Victoria thanks to a tip from the public: (Victoria Police)

VICTORIA -- Update: Two men who were wanted on Canada-wide warrants for violating their paroles were arrested in Victoria Wednesday morning.

Victoria police first issued a public alert warning that the two men – Dean Reber and Jonathon Muzychka – had failed to return to their community correctional facilities on Tuesday.

One day later, on Wednesday morning, police said that the pair had been arrested thanks to a tip from the public.

Victoria police have issued a public alert after two men on parole failed to return to correctional facilities Tuesday morning.

Police are searching for Dean Reber, 60, and Jonathon Muzychka, 43, who are now both wanted on Canada-wide warrants for failing to check in.

Police say that the men may be travelling together and that neither man should be approached. If you spot either of them, call 911 immediately.

Victoria police say Reber is a federal offender who is serving a nearly five-year sentence for multiple robbery convictions.

He was expected to return to a community correctional facility as part of his supervised statutory release. However, he failed to appear Tuesday.

Police say he may have been near the Johnson Street Bridge or Victoria waterfront areas Tuesday.

Meanwhile, police are also searching for Muzychka, who is serving a nearly 18-year sentence for several offences, including manslaughter, dangerous operation of a motor vehicle, escape from lawful custody, breaking and entering, and robbery.

He failed to return to his community residential facility Tuesday and has now had his parole suspended.

Muzychka is described as a white man standing 6’1” with a medium build. He has short dark brown hair that is slightly longer on the top and short on the sides, and was last seen with a stubble-length dark brown beard.

Police say that he may have recently been in the 900-block of Pandora Avenue.

Anyone who spots either man is asked to call 911.