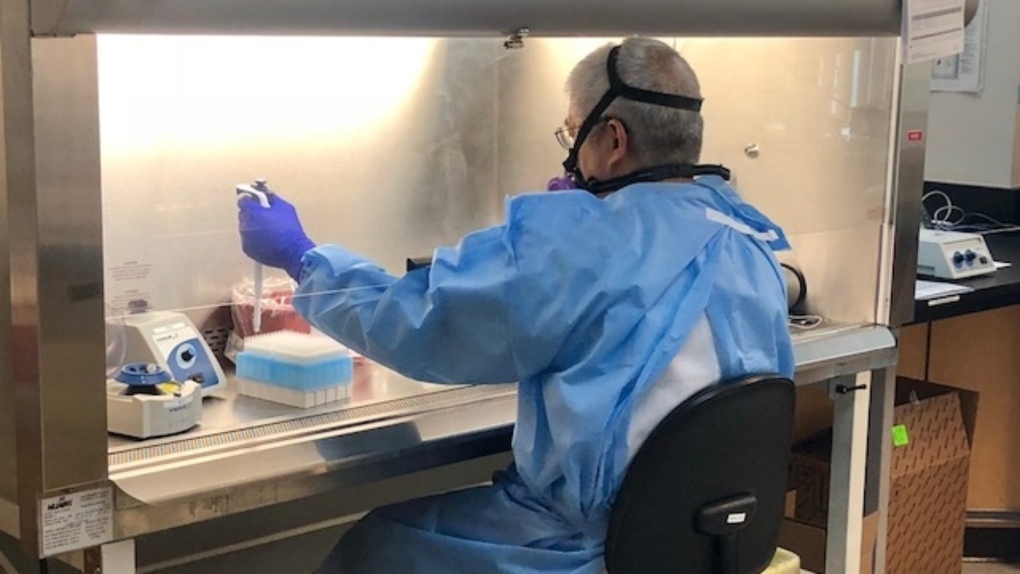 A researcher works in a lab at the BC Centre for Disease Control during the COVID-19 pandemic. (CTV)

VANCOUVER -- Health officials in British Columbia have announced 18 more cases of COVID-19 in their province, as well as 3 more deaths from the coronavirus.

In all, 2,507 people have tested positive for the virus in B.C. since the pandemic began, and 155 people have died.

There are currently 310 active cases of COVID-19 in B.C., according to provincial health officer Dr. Bonnie Henry and Health Minister Adrian Dix.

Of those active cases, 41 people are currently in hospital with the virus, including 8 who are in intensive care.

The total number of infections reported in B.C. Friday is 28 higher than the total reported on Thursday, but only 18 of those infections represent new positive tests, health officials said. The other 10 are B.C. residents who tested positive for COVID-19 in Alberta, isolated themselves there, and have now recovered and returned to B.C.

There have been no new outbreaks in health-care facilities over the last 24 hours, and the outbreak in an acute care unit at Lions Gate Hospital has now been declared over, health officials said.

There are currently 14 long-term care or assisted-living facilities and two acute-care units with active outbreaks of COVID-19 in B.C.

On Friday evening, Fraser Health announced a new community outbreak at the Nature's Touch frozen fruit processing plant in Abbotsford. Five employees at the facility have tested positive for the coronavirus, the health authority said.

Dix and Henry provided Friday's update on the virus in a written news release, rather than a live press briefing. Henry will return for a live news conference on Saturday at 1 p.m.

The update comes at the end of a week that saw B.C. transition to phase two of its reopening plan, easing restrictions on restaurants, salons and some other businesses that were ordered to close to slow the spread of the virus.

In their joint statement Friday, Dix and Henry noted that the ban on gatherings of 50 people or more remains in place during phase two. Indeed, it has been expanded to apply to drive-in gatherings, health officials said.

"The order has been amended to also include no more than 50 vehicles for outdoor drive-in events, with a restriction on the sale of refreshments," they said. "Anyone attending these events must stay in their cars unless they have to go to washrooms, which must be serviced with running water for proper hand hygiene."

Elsewhere in the province, there are 194 confirmed cases of the virus in Interior Health, 127 in Island Health, and 62 in Northern Health.

Increases in the counts of positive tests in the Interior and Island health authorities are related to the outbreak at the Kearl Lake work camp in Alberta, health officials said. Nine people now included in the Interior Health count contracted the virus at Kearl Lake. The individuals have since completed their self-isolation in Alberta, and have now recovered from the virus. Another person in the same situation is now included in the Island Health case count.

Health officials said the changes reflect "a data consolidation" that aims to show cases based on where individuals reside, even if they were not in that health authority during their illness.

A total of 2,042 British Columbia residents who have tested positive for the coronavirus are now considered fully recovered. That's more than 80 per cent of all cases recorded in B.C.