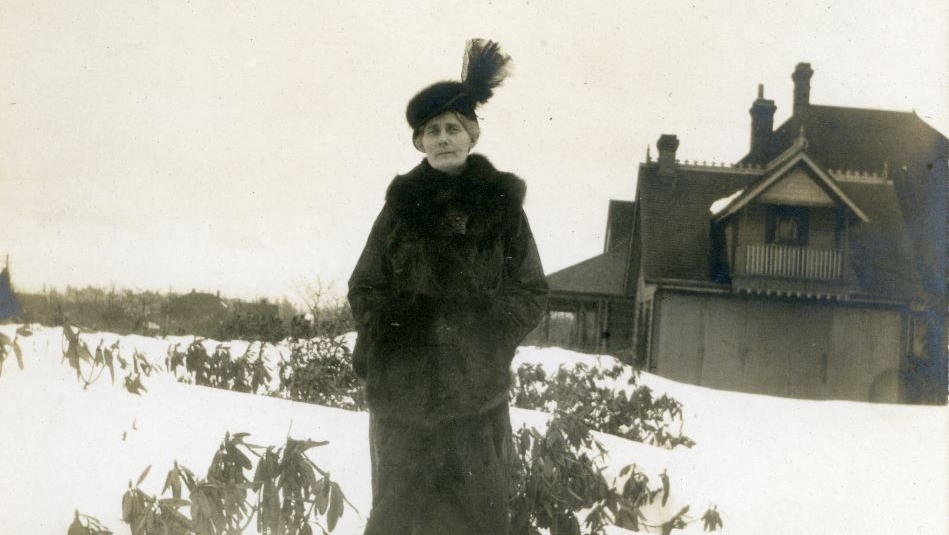 A woman stands in front of Oak Bay's Annadale Carriage House, believed to have been constructed 120 years ago. (Photo courtesy of Abstract Developments)

A 120-year-old heritage home is set to be dismantled in Oak Bay and reassembled in Victoria West later this year.

Located at 1561 York Place, the historic Annandale Carriage House is considered by many to be one of the most significant surviving properties in Oak Bay and was once owned by the son of a Canadian Father of Confederation.

The property, which has sat untouched for decades, was purchased in 2016 by Abstract Developments founder and CEO Mike Miller. After relocating the heritage home, Miller plans to construct his own family home on the York Place lot.

Miller originally announced his interest in relocating the carriage house in July of this year. Last week, Abstract came to an agreement with Victoria resident Murray Campbell to dismantle, relocate and reassemble the carriage house to Campbell's property in Victoria West.

“It’s like it was meant to be,” said Campbell.

“I had been looking for a suitable heritage building for my property for the past year and when former city of Victoria councillor Pamela Madoff had brought the Annandale Carriage House to my attention, we immediately reached out to Abstract to learn more.”

Campbell intends to eventually restore and convert the carriage house to a garden suite. His Robert Street property already houses a 1895-built heritage home alongside three other designated heritage buildings on the street.

The structure will be carefully dismantled in Oak Bay before being moved to Victoria West, where the pieces will be restored and the structure rebuilt. Campbell plans to retain the siding, windows, beams, shiplap and structural timbers of the carriage house. The architectural ornamentation will then be replicated or restored to ensure it closely resembles its original form.

"We are thrilled to support the relocation of the Annandale Carriage House structure to Robert Street,” said Abstract Developments director of development, Adam Cooper. “This plan allows the carriage house to remain within Greater Victoria and we couldn’t have asked for a better plan.”

Campbell is eager and excited to begin the relocation process for the carriage house structure. Campbell plans to not only restore the carriage house, preserving its heritage significance, but to establish it as a new rental suite within Victoria.

The original owner of the Annandale home was Sir Charles Hibbert Tupper, a Minister of Justice for the Dominion government, and son of Sir Charles Tupper, a Canadian Father of Confederation. During his career, the younger Tupper was a physician, leading Conservative politician and Canadian diplomat. During Tupper’s brief time living in the home, his father visited and dined at Annandale House.

Work to dismantle the Annandale Carriage House is expected to begin immediately.