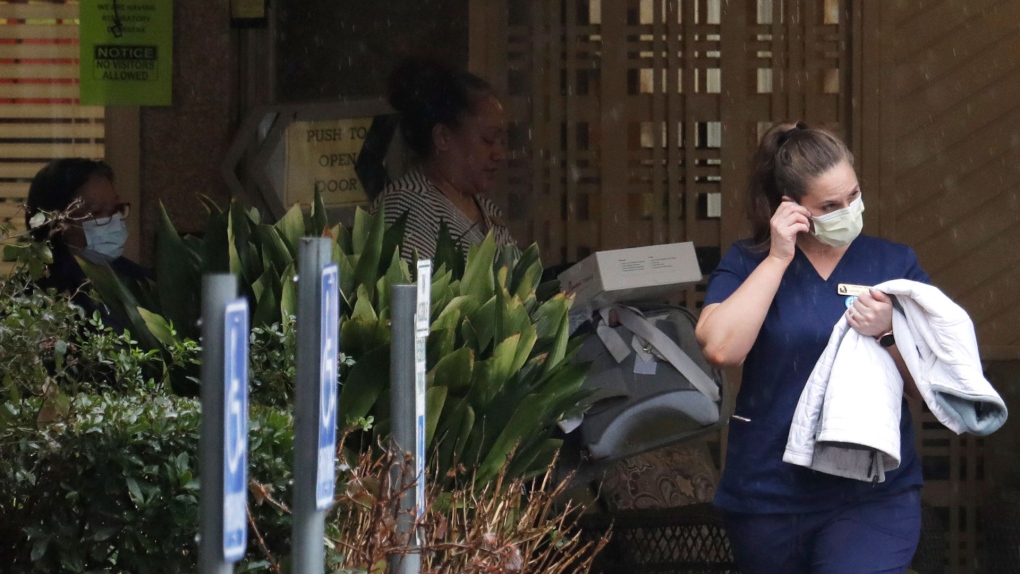 A worker at the Life Care Center in Kirkland, Wash., near Seattle, wears a mask as she leaves the building, Monday, March 2, 2020. Several of the people who have died in Washington state from the COVID-19 coronavirus were tied to the long-term care facility, where dozens of residents were sick. (AP / Ted S. Warren)

SEATTLE -- Washington state on Wednesday reported a 10th death from coronavirus as Gov. Jay Inslee said he was evaluating daily whether to order widespread closures and cancellations due to the outbreak.

The state Department of Health released updated figures showing that nine people had died in King County, the state's most populous, and one in Snohomish County. The state has now reported 39 COVID-19 cases, all in the greater Seattle area.

No other information about the newly reported death was immediately available.

The schools took the steps after researchers said the virus that causes the disease called COVID-19 may have been circulating for weeks undetected in the state. Experts said more cases will probably be reported soon.

Renton school officials announced late Tuesday that Hazen High School would close for the rest of the week after a student tested positive for the coronavirus. The school will be closed “as they work to determine who, if anybody, came in contact with the ill student to ensure it is safe for students and staff to return to school,” the district said on the school's website. The student was home recovering.

Also in Renton, a worker at Valley Medical Center tested positive for the disease after a patient came in with COVID-19, officials said in a press release. The patient was placed in isolation and the centre tested 20 employees, with eight coming back negative and one positive. Results were pending on 11 others, the release said.

The Washington state Department of Health says there are 39 confirmed cases, all in the Seattle area. Many cases are tied to a suburban Seattle care facility that has reported multiple virus cases and deaths.

Inslee said he was evaluating daily whether to order large public gatherings to be cancelled but had yet to do so.

“We have encouraged people who are responsible for large gatherings to give consideration whether it really makes sense to carry those on right now,” he told reporters Wednesday “Right now, we are deferring to the judgement ... of these organizations.”

He also said wide scale school closures hadn't been ordered because “there are so many ramifications for families and businesses,” especially for health care workers who might not be able to go to work because of child care issues. However he said the situation was fluid and that he would make decisions after consulting with health experts.

Health officials in North Carolina reported Tuesday that a person from Wake County tested positive for the illness after visiting the long-term care facility in Kirkland, Washington, where many of the state's cases originated. The person is in isolation and is doing well, according to the North Carolina health department.

In an updated message on the nursing home's website, Life Care Center said it is screening workers for symptoms before they start work and as they leave. Residents with symptoms are placed in isolation. The facility is still prohibiting visits from family and has set up an email for news media questions to keep phone lines open for family members with questions.

An Amazon employee who works in Seattle's South Lake Union neighbourhood tested positive for the new virus, The Seattle Times reported Tuesday afternoon, citing a message from the company.

“We're supporting the affected employee who is in quarantine,” a company spokesperson said in an emailed statement to The Associated Press.

The employee went home feeling ill on Feb. 25 and has not returned to work since, the message from Amazon to employees said. The message said Amazon was told Tuesday that the employee tested positive for COVID-19.

Other employees working in close contact with the affected employee have been notified, the message said.

A federal immigration field office near Tukwila also closed after an employee visited the Life Care Center. Acting Homeland Security Secretary Chad Wolf said the decision was made “out of an abundance of caution” and that it would remain closed for 14 days.

The Eastside Preperatory private school in Kirkland said it would have students stay home and do online classes because of virus concerns. The school for grades 5 through 12 of nearly 500 students said on its website it had no known cases or suspected cases connected to the campus, but “we do not feel it is prudent to wait until there is a known case to take action.” The school said it would conduct online classes through March 27.

Seattle Public Schools has so far said it will not close, but it is monitoring the situation.

Local and state health officials have not recommended school closures or cancellation of activities but said they respect the decisions of local school leaders.

King County moved the first of 14 modular units on Tuesday to a site in White Center. They plan to house COVID-19 patients in the units so they can receive treatment in isolation.

And the state House on Tuesday unanimously passed a measure that would draw $100 million from the state's emergency “rainy day” fund to help pay for the response.

The move by the House comes a day after Secretary of Health John Wiesman asked lawmakers for $100 million in emergency funding to deal with the growing costs of the state's response. Wiesman said that $3.5 million has already been spent on coronavirus efforts, with $2.3 million of that being spent by the state and the remainder by local health jurisdictions. The measure now heads to the Senate, where a similar measure was introduced yesterday.