1 arrested after assault, vehicle theft and standoff in Burnside Gorge 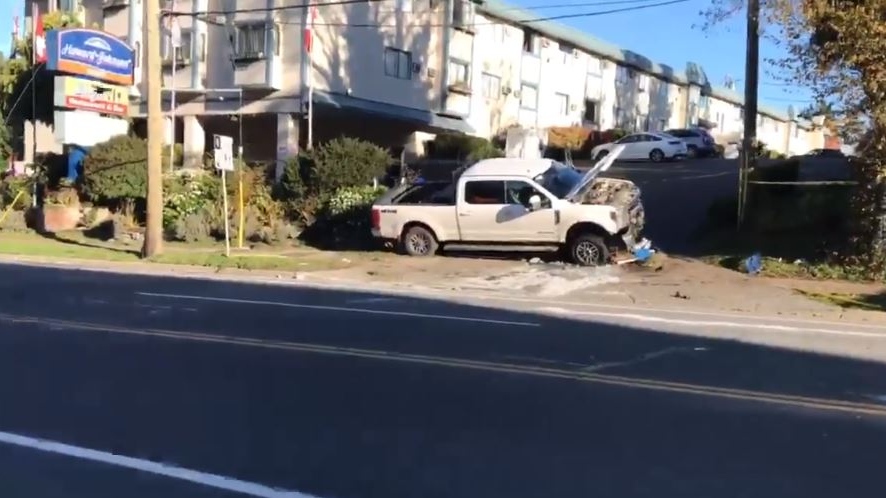 Police say the incident began around 2 a.m. after officers were called to the 300-block of Gorge Road East for reports of a vehicle theft.

When officers arrived, they found the owner of the vehicle was suffering from non-life-threatening injuries. The owner told police that they had tried to stop the man from stealing their vehicle, at which point the man assaulted the vehicle owner and drove off in the truck.

While trying to escape, police say the suspect crashed into a hydro pole, causing “significant damage” to both the vehicle and the power pole.

After crashing, the man abandoned the vehicle and ran into the nearby Howard Johnson hotel, which is currently being used as a temporary housing facility. There, he barricaded himself inside a suite.

Crisis negotiators and the Greater Victoria Emergency Response Team were called to the building and began speaking to the man. Hours later, just before 8 a.m., the man surrendered to police without incident.

As of approximately 11 a.m. Friday, officers were still at the housing facility due to a second standoff incident.

The separate incident involved a man barricading himself inside the same suite that the first man locked himself in.

Police say that the second suspect had a ban on visiting the building which comes from a previous serious assault file.

Traffic in the 300-block of Gorge Road East was temporary sopped Friday as police remained on scene.

At 1:30 p.m., Victoria police said the second man had been arrested and traffic would return to normal.

A white truck is heavily damaged and sitting sideways in the driveway outside the Howard Johnson hotel.

Investigators an police on scene. The road remains closed. pic.twitter.com/bekIyPrS1w